skip to main | skip to sidebar

A trip to Cantigny Park. I don't know why I forget about this fabulous place so often. I made sure to update my calendar with all of the new outings that are coming up. Everything from symphonies and Big Band concerts on the lawn ($5 a car!) to Lego train shows ($5 a car!) to Revolutionary and Civil War reenactments (I'll let you guess how much those cost... ) Between the First Division museum that my children never fail to be fascinated by, the endless gardens (a few more weeks and we can go to see the tulips and daffodils!) and the McCormick mansion (we missed that this time, but will go back again soon because, again, IT'S ONLY $5 TO ENTER).

Here are a few shots of the tank park outside the First Division Museum. I really appreciate the way that my children respond to my acknowledgments that yes, the guns and big ships and tanks are very cool but that each man who enters a war is someone's son, brother, father, husband and friend. Each man that never comes home is a loss so great that it can't be put into words. I want them to know that war isn't something we should ever forget, but it shouldn't be glorified or made into something exciting and fun. Taking them to museums and reenactments where they can get a tiny glimpse into the realities of war is important. Knowing that their Papa fought in Vietnam but can't talk about it confuses them. Allowing them to walk through the man-made jungle in the First Division Museum and then saying "Now imagine people are shooting at you. Imagine that you don't know where that enemy is. Imagine it is hot and you're hungry and scared. Now look to your right..." and there is a manikin, hidden in the bushes.

It opens up lines of conversation, that's for sure. 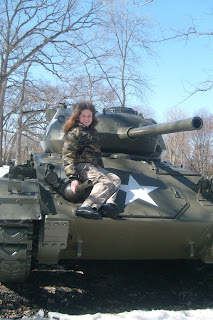 Justin's favorite tank. Not sure why, but I'm sure he'd be willing to explain the details on it that are so interesting. He knew 90% of the tanks there, including information that wasn't on the placards. 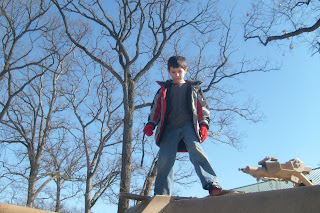 The Mountain Climber award goes to.... Evan! He surpassed even his monkey sister. Up and down, in the slushy snow (42 Farenheit! Hellooooo spring!), he fought battles and fended off the enemies while his siblings clambered after him. 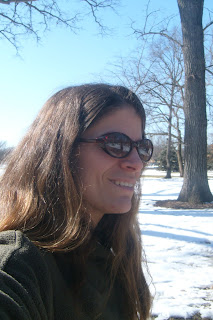 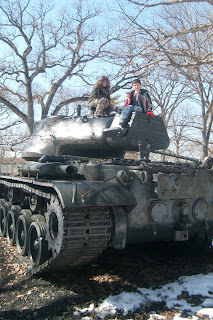 No idea how they got on THAT one... 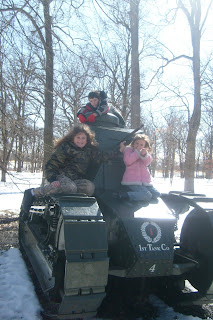 Everyone finally had their own stick to shoot me with. Sweet kids. 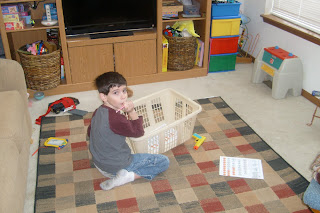 Doing his math in a laundry basket... 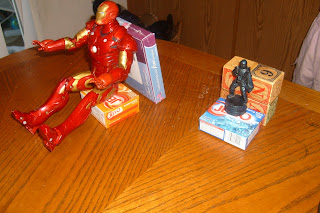 Why yes. That IS Boba Fett on a blue Jell-O box. But what is it that Iron Man is leaning against? 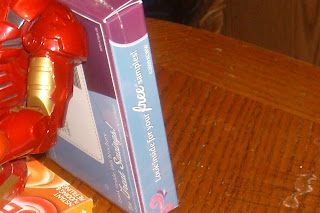 Ah. Of course. A free sample from Kotex. Naturally. 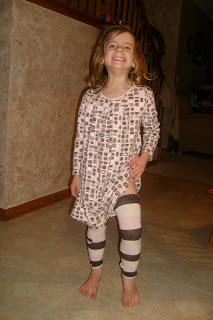 My crafty moment of the month: Her expensive tights from Gymboree that I splurged on (when on sale) for Christmas 2008. The dress still fits (I bought it BIG) but the tights kept falling off her tush. So I cut off the feet and sewed them up. Then I cut off the tush, saved the elastic material and stitched it into the new seam by the thigh. Voila! Instant, homemade "Babylegs". 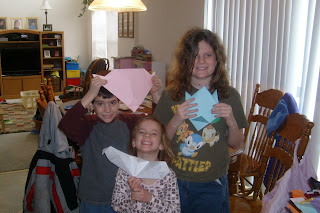 Our venture into origami resulted in a pig, a bat and a cat. I think we're going to make the frog that I used to make when I was little. It actually jumps! We used to do frog jumping races with dozens of origami frogs... Good memories.
Posted by tracey.becker1@gmail.com at 2:14 AM